WHEELING – Students in a Wheeling Jesuit marketing class are aiming to break several world records for a good cause. The group’s main goal: to get as many people as possible to do a headstand at once during a new event, called “WJU Half Blast.”

Half Blast, created by WJU seniors Eric Wyant, Garrett Sancomb, Erin Stefanowicz and Giovanni Castiglione will give students a chance to have fun before heading home for winter break. 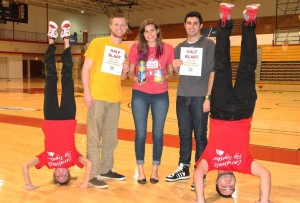 During Half Blast, for every headstand completed and documented via social media, Morgantown Security & Fire Co. has offered to donate an item of clothing or non-perishable food item to Catholic Charities of West Virginia. The marketing students are promoting the event and campaign on Twitter and Instagram using the handle @WJUHalfBlast and on Facebook: WJU World Record.

“Our goal is to break these world records while catering to the immediate needs of the community,” said Wyant.

According to Greg Sheperd, WJU instructor of business, the event grew from a simple e-Commerce marketing class assignment, which was to electronically market a community event.

“At the end of this project, they will evaluate the success of their marketing efforts using attendance data, surveys, and other measurements,” said Sheperd. “I’m proud of these students, and this class. Their efforts on this project and others in class have exceeded my expectations, and I’m privileged to have the opportunity to teach such exceptional students. Let’s break a world record!” he added.

To date, 70 handstand photos have been submitted, including one from WJU President the Rev. James Fleming, S.J.

Wyant noted if there are not enough people to break the current record of 265 simultaneous headstands, students will attempt to break other world records.

Half Blast will take place 1-3 p.m. on Saturday, Dec. 6. All are welcome. A donation of two non-perishable food items or item of clothing to benefit Catholic Charities West Virginia is requested for admission . The event also will have free food, t-shirts, and multiple prize drawings. 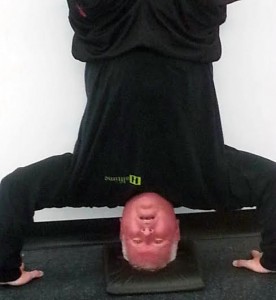 WJU President the Rev. James Fleming, S.J. does a headstand for WJU’s Half Blast to benefit Catholic Charities West Virginia .