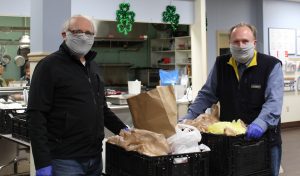 Volunteers Lou Volpe, left, and Quenton Northcraft, right, pick up meals to deliver to the homebound in Wheeling

Quenton Northcraft has a passion for service, and he uses his talents and gifts to improve the lives of other people. He is a devoted volunteer at the Catholic Charities Neighborhood Center in Wheeling.

But the team at the Catholic Charities Neighborhood Center in Wheeling considers Northcraft’s work to be extraordinary.

“Quenton’s thoughtful and strategic approach is evident in everything he does,” said Trish Whitelatch, former CCWVa Neighborhood Center Assistant Coordinator. “He noticed that some of the carts at the Center were not in good repair, making it difficult to move donated food and goods. He donated two carts that are much easier to maneuver and can be used for multiple purposes. This is just one example of how Quenton has helped us become more efficient so we can improve our services.”

Northcraft began volunteering at the Neighborhood Center by delivering meals to those who are homebound. 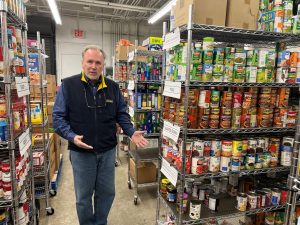 “When I first started there I was just running a meal route with a friend. I was just taking food to an address,” said Northcraft. “It took a little while for it to click… and that’s the transformative part.”

“It changes everything when you realize it’s not just food to an address, but meals to people,” he said. “The people get to know you. You get to know them and really that’s the best part.”

In addition to sharing his time and talent with Catholic Charities, Northcraft volunteers at the Mother Jones Center for Resilient Community and is an active member of Saint Michael Parish.

To learn more about volunteering at the Catholic Charities Neighborhood Center in Wheeling, call 304.232.7157.