A mother’s love for her children is many times the only source of strength in times of crisis. Single mothers are no exception; rather, they may experience this often. In difficult environments, success can be difficult to attain yet is vital to improving a family’s well-being.

Brenda, a native of McDowell county, was married at age 17 and mother to two boys by age 22. Her young family moved to North Carolina and remained there for almost 20 years. When Brenda’s mother became ill two years ago, Brenda returned to McDowell county with her teenage daughter, and cared for her mother. Upon the passing of her mother, Brenda and her daughter found themselves homeless. They found temporary shelter at S.A.F.E. (Stop Abusive Family Environment) for the next 18 months. 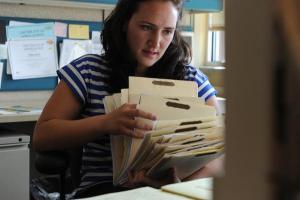 Our Case Managers work out a plan for an individual to achieve goals toward self-sufficiency.

Brenda sought help at Catholic Charities West Virginia and was thrilled to participate in Case Management Services with the goal of securing permanent housing, furniture and household items. Her Case Manager referred her to Catholic Charities WVa’s Adult Basic Education program so she could obtain her High School Equivalency (HSE) diploma.

Sr. Binh Nguyen, Brenda’s Case Manager, offered support and encouragement which allowed her to focus on this goal. Brenda accepted guidance in budgeting because she wanted a better financial situation. Brenda passed her HSE exam, and this success has empowered her to continue to seek ways to improve her family’s well-being.

Brenda credits Catholic Charities with providing the tools and support necessary to achieve this goal and to set her on a path of attaining goals towards self-sufficiency and a better tomorrow for her daughter.