Nancy and Marion, a mother and daughter duo, are two amazingly bright, kind, and hardworking clients whom Catholic Charities West Virginia’s Migration and Refugee Services program has recently had the pleasure to serve.

Despite facing obstacles such as a language barrier and a negative stigma toward immigrants in this country, Nancy and Marion emigrated from the Dominican Republic to pursue a better life and education for themselves and their family in the United States. 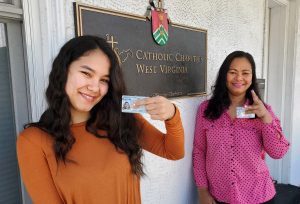 With great enthusiasm, Nancy and Marion both shared that they were “so very happy and forever grateful to Catholic Charities for helping them through this process!”

Both agreed that discovering Catholic Charities was a hidden blessing they were not expecting when they first moved to the area. Since coming to the United States, Nancy and Marion have worked hard to become fluent in English as a second language, and they have taken action to better themselves and the community.

Nancy graduated from Valley College with several accolades and now works to enrich local communities, one family at a time, in her line of work. Marion has excelled in school, been employed, and is now pursuing her college degree!

Both have been faithful volunteers within the community. In fact, Marion is a now a volunteer with Catholic Charities West Virginia! Their next endeavor is to apply for citizenship in the United States!