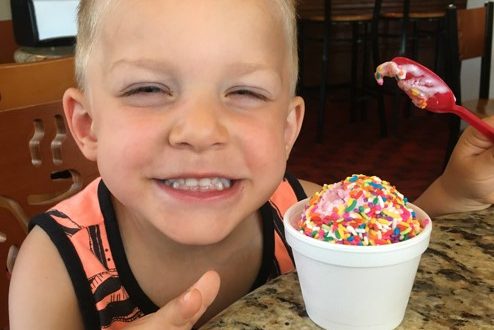 My son, Camden, was born in April of 2013 at just over 35 weeks gestation.  I was over the moon excited to meet the little life that had I had been nurturing for just shy of nine months.  He was considered premature and was smaller than all of the other babies in the nursery, but he did well despite his earlier than expected entrance into the world and we went home just two days after he was born.

After 12 blissful weeks of maternity leave, I returned to work full time and Cam began to attend daycare with his big sister.  As his second birthday drew near, the staff and I began to notice that Cam was no longer meeting the developmental milestones for his age.  The director of the facility was familiar with the Birth to Three program because her own son had received services, and she didn’t hesitate to recommend the program to me and begin the referral process.  Despite knowing that Cam was falling behind his peers, it was nonetheless hard to hear it confirmed by another person.

A week later, I met with our Interim Service Coordinator, who was unfailingly patient and kind to me as we talked about Cam.  She walked me through all of the details of the program and we chose practitioners based on what qualities that I felt were important and the kind of personality that Cam would work best with.  The practitioners completed his evaluations and we met again to discuss my goals for Cam and write our plan to receive services. 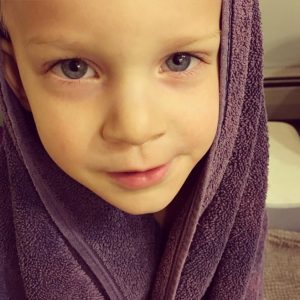 On paper, Cam had a 25% delay in fine motor skills, a significant (greater than 40%) delay in expressive language, and he was communicating at the level of a 9-12 month old at the age of 22 months old.  At home, Cam was struggling to use the left side of his body and his hand was almost always tightly clenched in a fist.  He spoke less than ten words.  He was unable to feed himself, to communicate his needs and wants, and was becoming increasingly frustrated because he couldn’t play like his big sister.  Meltdowns happened frequently because he so badly wanted to do all of the things that she did, and he was stuck in a body that wouldn’t allow him to.

Cam began receiving physical, occupational, developmental and speech therapy both at daycare and at home through Birth to Three.  His therapists quickly figured out the best ways to engage Cam and help him focus, and he progressed quickly towards the goals that we had set for him.  By the time that Cam turned three and it was time to transition out of the Birth to Three program, his physical delays had been resolved and we received assistance in writing his IEP for speech therapy through the school system.

To me, Birth to Three isn’t just a program.  It’s the reason that Cam is able to squeeze me tight with both arms when I tuck him in to bed, to eat ice cream with a spoon, to put together the Lego sets that he loves so much, and to tell me that he loves me (and ask me to buy more popsicles at the grocery story).  Without this program, I don’t know where we would be today, but I do know that our lives are better for the love and services that we received.