World Refugee Day honors the strength and courage of refugees who have had to flee their homelands because of conflict or natural disaster. World Refugee Day is celebrated on June 20, and the day serves to encourage public awareness and support of refugees.

Catholic Charities West Virginia’s (CCWVa) Refugee Resettlement and Immigration Services program is the only refugee resettlement provider in West Virginia, and has been successfully resettling refugees for over 35 years.

“On World Refugee Day, and throughout the year, we celebrate the spirit and perseverance of those who have been displaced from their homelands and denied the human right to a safe place to live,” said Beth Zarate, CCWVa President and Chief Executive Officer. “Let our hearts be open to the plight of refugees and recognize the valuable contributions they make to the communities they join.”

A refugee is someone who fled his or her home and country owing to “a well-founded fear of persecution because of his/her race, religion, nationality, membership in a particular social group, or political opinion,” according to the United Nations 1951 Refugee Convention.

“Catholic Charities works closely with volunteers, parishes and sponsors of refugee families,” said Zarate. “Volunteers are crucial in welcoming refugees and helping them adjust to their new home.”

In the United States, the Catholic Church has been assisting refugees and immigrants since the nation’s founding. Catholics are called to help in the Gospel; in Matthew (25:35), Jesus tells his disciples, “I was hungry and you gave me food, I was thirsty and you gave me drink, I was a stranger and you welcomed me.”

“The Works of Mercy give us a model for how to treat one another,” said Zarate. “Through our refugee resettlement program, we are welcoming the stranger and practicing our faith.”

Peace among the Hills

Najib Ahmad Bakhtari found refuge in West Virginia in 2019. He came to Charleston from his hometown of Mazar-i-Sharif in Afghanistan. 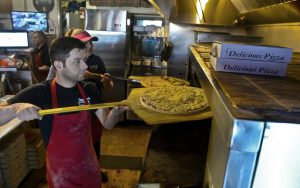 (Photo courtesy of WV Gazette Mail) Najib Ahmad Bakhtari works at a pizza restaurant in South Charleston after settling in West Virginia with help from the CCWVa Refugee Resettlement and Immigration Services program.

Because of his work as a cook in a kitchen that served Americans helping Afghan people, Bakhtari’s life was in danger. His sister, Wafa Bakhtari Noorzai, had come to America and settled in Charleston, WV in 2015; she was Bakhtari’s tie to West Virginia.

“We help refugees resettle where they can thrive and become contributing members of their communities,” said Rogers.

CCWVa helped Bakhtari find employment that aligned with his skills and experience. He began working at a pizza parlor in South Charleston.

Bakhtari reported that he was settling and grateful to CCWVa for help in assimilating to the Mountain State.

“I’m happiest because anywhere I go, people have been helpful,” said Bakhtari.