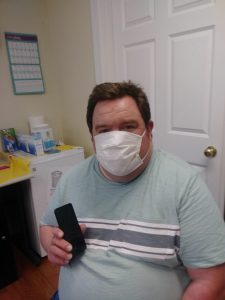 Eugene has been a case management client at the Martinsburg office since May 2019.  He was referred by his high school special education teacher, who had been helping him for years. She was concerned because he had recently been evicted and was experiencing homelessness.  At the time, he as working as a dishwasher at a local restaurant.

Initially, his Catholic Charities case manager, Kat Hagedorn, helped him get situated at the Union Rescue Mission while he worked with Kat on his finances, and she worked with other organizations to identify additional resources.

Eugene also got a second job as a dishwasher at another restaurant, and in November 2019 he moved into his own apartment. Eugene was so proud of the fact that he could pay his rent himself, make his insurance payment and continue his car payments.

In March of 2020, Eugene was laid off from both of his jobs because of the coronavirus pandemic. In the past, the loss of his job would have meant a downward spiral for Eugene. But this time he knew he could call Catholic Charities.

When Kat met with Eugene, they both wore masks and gloves and completed the online application for unemployment. Catholic Charities was able to assist him with his rent for April until his unemployment began. When he got his unemployment card, Kat taught Eugene how to use it.

Kat also assisted Eugene with making his car insurance payment over the phone, as he had always done it in person. She also helped him make arrangements to extend his car, ensured he understood how to put his CARES funds into his savings account, and taught him how to cash the check from his insurance rebate.

During that meeting Eugene whispered from behind his mask how much money he had in savings and on his unemployment card right now.  Even though Kat couldn’t see because of his mask, she knew he was smiling.  He said, “I can pay the rent on my own this month. You don’t have to help me.  But you will help me when I need it. Thank you.”