The St. Mark’s Scholarship was established by an anonymous donor at St. Mark’s Catholic Church in Vienna, Virginia. Each year since 1989, this large church of over 2,000 members has supported the outreach efforts of Catholic Charities West Virginia to assist persons in need in McDowell and Summers Counties.

The church, just outside of Washington, D.C., has also hosted several groups of grade school children from McDowell County, allowing them to see the sights of our nation’s capital. The scholarship donor was so impressed by the children from Anawalt Elementary School, who made one such visit, that this scholarship was established in 1993. 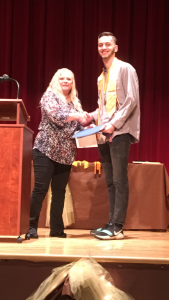 The scholarship is awarded annually to a graduating high school senior from McDowell County. Catholic Charities West Virginia staff members are pleased to serve on the scholarship committee that selects the awardee. The scholarship is for $2,500 per year, renewable for four years of college if certain academic standards are met.

The 2018 recipient is Brice Shumate, who will be finishing 1 out of 99 graduating seniors from Mount View High School in Welch, West Virginia. His involvement in school activities include being President of HSTA, Interact Vice President and Treasurer, BETA, Student Government, and Superintendent’s Leadership Group. His favorite hobbies include playing video games, hunting, and fishing.

Brice plans to pursue a career in Accounting at West Virginia University in Morgantown, West Virginia. We would like to congratulate Brice on his impressive achievements and hope that all good things come his way as he embarks on the next phase of his life.