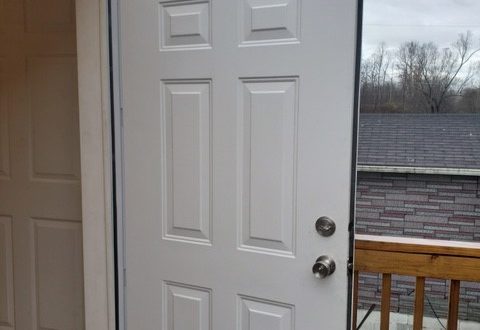 On June 23, 2016, people’s lives were drastically changed over the course of 36 hours. Torrential rainfall caused flooding and a state of emergency in 44 West Virginia counties.

Now, 3-½ years later, one woman has finally and fully recovered from that flood.

Shortly after the flood, a Disaster Case Manager from Volunteer Organizations Active in Disaster (VOAD), of which Catholic Charities West Virginia is a member, visited Janie’s home and gave her news no one ever wants to hear: her home was no longer safe to live in. Her recovery plan was to replace her old home with a new one elevated above the flood plain. 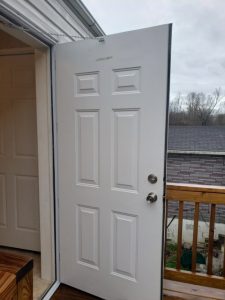 Janie lived in her house for over 45 years, and was no stranger to water. “I’ve been flooded out right many times,” Janie said. “You pray there won’t be another flood, but you know there’s going to be.” She said the National Guard will soon be tearing down her old house, and she’s still trying to adjust to that reality. “You leave a lot of memories. It’s like leaving part of your family.”

Lora Pierce, Catholic Charities Director of Disaster Services, is sensitive to the spiritual and emotional element of disaster recovery. Lora learned of Janie’s situation from the VOAD Disaster Case Manager.  “I heard about a senior woman who lived in a house that the Case Manager said she was afraid to walk on the floor for fear of it falling in,” Lora said. “I stayed in contact with the Case Manager inquiring on the progress of Janie’s case.  I added her to my personal prayer list.”

When VOAD’s grant ran out, Catholic Charities West Virginia was able to take on Janie’s case. There were many issues the two had to tackle during the recovery process. For one thing, when the ramp was built on Janie’s new trailer the door was installed so it swung the wrong way. She called Lora, who made sure the problem was fixed. “Lora is great!” Janie said. “She moves things forward!”

As this 3-½ year process is coming to a close for Janie, she feels a sense of relief. “Water can’t get in anymore. I won’t have to go through the cleanup,” she said.

Lora pointed out that there are still approximately 100 people remaining on the recovery list. That’s why Catholic Charities’ focus on long-term recovery is so important. “We stay with people through the long haul — through recovery,” she says. “If I’m not helping someone, I’m not doing my job.”